Azoospermia: I have no sperm. What now?

Finding out that you don’t have any sperm is devastating for most men (and their partners). Lack of sperm in the ejaculate is called azoospermia. This patient information is a quick overview of how CRGW diagnose causes of azoospermia and what treatment options are available.

How common is it?

Azoospermia, defined as the absence of sperm in the ejaculate, is identified in approximately 1% of all men and as much as 10% of infertile couples seeing their doctor when they cannot conceive.

What criteria defines a man as azoospermic?

Azoospermia is defined as the absence of sperm in at least two different ejaculated samples. This includes the samples being centrifuged which is where an ejaculate is spun at high speed so that any cells in the sample (possibly including sperm cells) collect together to enable us to check everything in an ejaculate. It is not enough for someone to be deemed as azoospermic just because a drop of their semen has been put on a microscope as if a man has an incredibly low sperm number we will only see this after centrifugation. When we see sperm after spinning it we call this ‘cryptozoospermia’ rather than azoospermia.
We also check 2 samples (ideally 4-6 weeks apart) as sometimes a man can be azoospermic in a one-off ejaculate but then we may see sperm in another sample. The 4-6 weeks allows us to rule out that perhaps a fever, flu or illness 3 months previously had caused temporary azoospermia in the first sample as it takes around 3 months for a man’s body to make sperm.

I’ve had 2 sperm tests with no sperm seen. What next?

Obstructive azoospermia is caused by a blockage in the reproductive system while non-obstructive azoospermia is caused by a lack of sperm production. Determining if the reason for a lack of sperm is from either a blockage versus a production issue is critical, as both are treated differently. A blockage in the reproductive system means that sperm are being made, but they are hitting a roadblock and cannot get out of the body. A production issue means that the piping is open, but no sperm are being produced. If a production issue is identified, treatment with medications may be considered to stimulate the testicle to make sperm.

How do we diagnose if its OA or NOA?

Physical Exam: At physical exam, men with blockages typically have normal sized testicles, with a length of greater than 4 cm. Sometimes there are other subtle findings, including fullness of the epididymis seen in A, B and C below (a reservoir on the side of each testicle) or lack of a vas deferens seen as D below (the tube that sperm swim through). Men with a production issue often have smaller testicles, which may be soft in consistency. They do generally have a vas deferens, which is able to be felt. 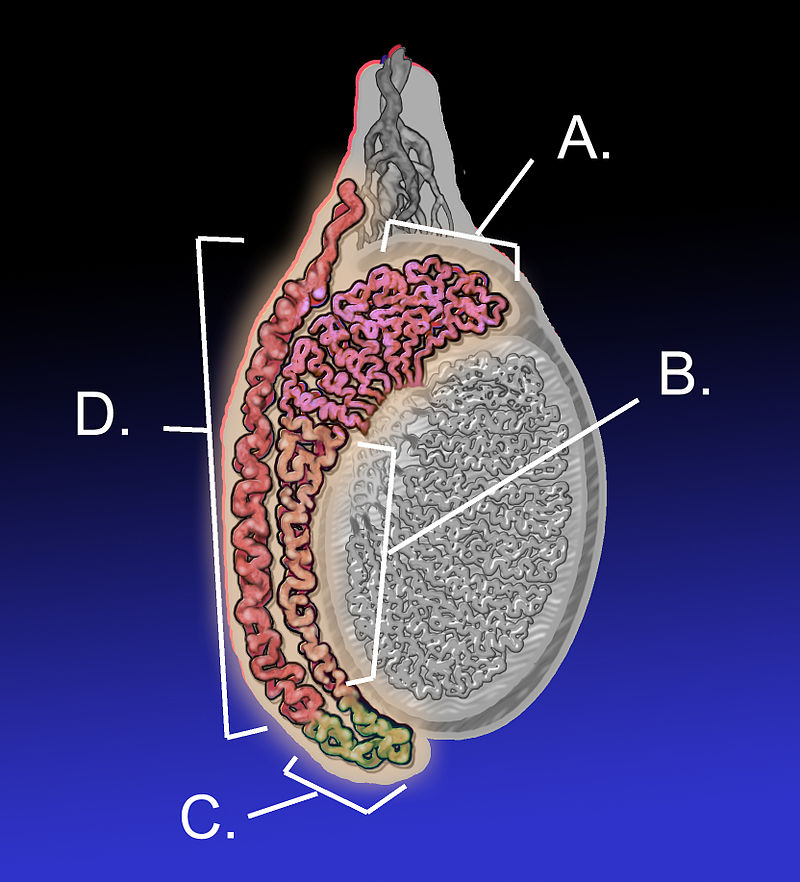 Hormone Tests: Blood hormone testing is very useful in distinguishing these conditions. If a man has blockage, his testosterone is generally normal and FSH (another male reproductive hormone) is in the normal range. This is because the testicle is functionally normal. Conversely, if a man has a production issue, his testosterone may be low and FSH elevated, indicating some degree of testicle functional impairment.
Often when we see azoospermia we will recommend as a first check for a patient to seek testing from their GP for the hormones FSH, LH, Testosterone and Prolactin. We will ask for these even when we know azoospermia is caused by a known blockage like when a patient has previously had a vasectomy. We do this as in some patients, many years after vasectomy their testicles stop producing sperm and these hormones will let us know the likelihood of that. If you don’t want your GP to do these tests we of course can do them if you give the clinic a call.

Testicular Biopsy: The final test to determine if a man is blocked or not is a testicular biopsy. Before we do this, we will have done the examinations and tests above so we (and you) will know the % likelihood of us finding sperm before undergoing the procedure. This procedure is done at CRGW under sedation (most guys will be awake and not feel anything or will snooze during the procedure). Once the testicle is completely anesthetized we will attempt to take sperm from the epididymis (the reservoir on the side of each testicle mentioned above). If we don’t find there we may take several pieces of tissue from the testicle and dissect these under a microscope looking for sperm.
When we do find sperm, often there are only adequate numbers to allow us to do ‘ICSI’ which is similar to IVF. When we find sperm we freeze it for use in treatment with the aim of having enough for 3 future ICSI treatments if needed.

I have further questions. How do I ask them?

Please feel free to contact the clinic by telephone or email or alternatively ask an expert online.