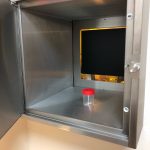 And they’re off! So what actually happens after the ‘hatch’?

I’ve seen many, many men’s rooms. It’s one of those things as an embryologist I’m always curious about when visiting colleagues in their own clinics. No two are alike. Many clinics will have their own idea of how the ‘men’s room’ should be configured. Over the years I’ve particularly taken some amusement (or is that bemusement) from what my female colleagues have perceived as an ideal men’s room. It’s a vital yet often small room without which our jobs as embryologists would be somewhat hindered. Any way, I digress.

I know what you are thinking chaps. You get taken to the men’s room, door locked, work to do! This time though, it really matters! This time it’s a sperm test, or more stressful a treatment sample! This time your swimmers have been called to action. In a few hours time they have to line up for a bit of natural selection (or in the case of ICSI) embryologist selection when they finally get to meet and be dwarfed by that massive mercurial cell… an egg!
So sample produced and into the hatch. Click! The hatch locks. Some chaps try to open the door a few seconds later to find it locked (it does this). Others, desperate to check on the little chaps they’ve spent 80 days making will open the hatch a minute or two later to find the inside of the hatch empty. Sample mysteriously gone! Their precious sample has been whisked off to as far as they know who knows where to undergo who knows what.
So what happens to your sperm sample once it goes into the hatch? Let me enlighten you!

Once we take your sample from the hatch we use a sharpie to write the time the sample arrived in the hatch. Then we do something vitally important. We do nothing. For around 20 minutes we have let your sample ‘liquefy’. Every day I see one of my colleagues come into the lab and see a sperm sample sat with its notes and pick it up and give the pot a gentle swirl. We do it robotically. If it’s watery in consistency it’s good to go and we can get to work, otherwise we wait a little longer.

So what is “liquefaction”?

It’s a process that starts immediately after ejaculation. Over time, the proteins that make your semen gelatinous (and too gloopy for us embryologists to work with) are broken down by enzymes that were released from your prostate when you ejaculated. This takes 20-30 minutes hence the wait on our part.

What is the purpose of liquefaction?

The reason sperm samples are a bit gel like straight after ejaculation is Mother Nature offering a helping hand. It’s more likely to stay in the vagina and not leak straight out. Not so beneficial in a sperm pot though! However if it stays like gel, the sperm are going to struggle to swim out (imagine swimming in treacle versus water). So liquefaction is aimed at first holding the sperm in place inside the vagina and then becoming watery to offer the little chaps something ideal to swim in as they make their journey along the cervix.

If it’s less than the 20 minutes embryologists wait to a watery state, then no problem but much over 30 minutes and (at least in natural conception) less sperm may reach the egg. Over 60 minutes and the sperm may remain trapped, never to reach an egg.

What causes a long liquefaction time?

Infection can do this. If there is an infection then there are white blood cells trying to fight it. These cells can have a negative effect on the enzymes that make your sperm watery over time.

Another reason may be that your body isn’t creating all the necessary ingredients for healthy semen (thats semen not sperm!). Sperm only make up roughly 5% of your semen. The rest is a mixture of nutrients for the sperm such as acids, lipids, and the enzymes that will eventually cause liquefaction.  These enzymes are produced by the prostate, so a long liquefaction time could also indicate an infection or dysfunction of your prostate. If an infection is found, antibiotic treatments will likely clear the infection, as well as the long liquefaction time associated with it.
Even dehydration can effect liquefaction time. Semen is a body fluid replenished by water so if you’re not drinking enough that could have a negative effect on liquefaction

What if it doesn’t liquefy?

Embryologists have tools! We use culture media, a water like solution that is packed full of ‘sperm food’ that when care fully mixed with viscous gloopy sperm will nearly always cause it to liquefy.

Volume
Using an electronic pipettor we measure the volume of the sample and give is a gentle mix to ensure when we take a drop for the microscope, that drop is representative of the whole sample. A normal sperm volume is anything over 1.4ml (that’s less than half a teaspoon). A volume below this may be due to: Frequent Sexual activity: There’s only so much semen that your body can produce and frequent ejaculation will cause a lower volume. This is why we recommend a period of abstinence from sexual activity of 2-7 days prior to a sperm test. Vitamin Deficiencies: Selenium (found mostly in nuts, seeds, beans, and fish) and zinc (found mostly in beef, poultry and lentils) when lacking in your diet can lower your semen volume. Obesity : Those extra pounds could be lowering your semen volume (BMI over 30). Low Testosterone : Hormonal levels are what drives the majority of sexual function. If Testosterone levels are too low, less semen is produced. Retrograde Ejaculation : a condition in which no semen is released during ejaculation. Instead of semen travelling out of the body upon orgasm, it goes backwards into the bladder.

Count: The World Health Organisation (WHO) who define normal fertility set the lower range of normal sperm count 15 million per millilitre. While it only takes one sperm to fertilise an egg, a higher amount of sperm in an ejaculate, the higher the odds that one of your swimmers will go for the gold and actually fertilise an egg. Embryologists measure sperm with a counting ‘chamber’. We take a tiny (5 micro litres) drop of the mixed semen and look at it on a chamber while it swims around as seen in the following video. It takes much practice to accurately count moving cells. We have to count moving cells and non moving (as outlined below). Oh, and like volume, your period of abstinence from sexual activity will effect your count. Less than 2 days since you last ejaculated? Your sperm count may be low due to this.

When we look at the chamber the embryologists trained eye knows instantaneously if their is a problem or not. In its simplest form, it regards to the sperm count if the chamber looks like the video above or the schematic below on the left then the count at least is normal. If it looks like the view on the schematic on the right then we have a sub-optimal sperm count (we still have to assess all other parameters though!). Sometimes with severe male factor infertility there may be no sperm at all on the grid or indeed on the chamber in which case we have to employ other techniques and go hunting for sperm. Sometimes it can take us hours to find the 5 or 10 sperm we need for treatment but if we can find them, we can fertilise eggs with them. If we cannot find any sperm at all then we have to investigate why that may be. I’ll leave that discussion for a future post.

Motility: Measuring sperm motility can be a difficult task. Typically, sperm cells are counted and categorised by both speed and direction of movement. To understand the challenge, imagine you were to open a beehive and attempt to record how many bees flew away in a straight line and how many hovered around. Because analysing sperm motility is difficult, there is a lot of variation from lab to lab and from report to report. You should understand that motility numbers need to be taken with a grain of salt because the numbers are subject to the variation that comes from counting several million moving cells. Embryologists categorise sperm as: Non-motile: these sperm are not moving. Non-progressive motile: sperm that are moving but not going anywhere; often they are just wiggling. These are referred to as ‘NP’ on our analysis forms. At least 40% of sperm in a sample should be motile. Progressive motile: sperm that are moving and actually getting somewhere. Also called ‘PR’  these can be divided into 2-3 subcategories. At least 32% of sperm in a sample should be progressively motile. Like volume and count, your period of abstinence from sexual activity will effect your motility. More than 7 days since you last ejaculated? Your sperm motility may be low due to this.

Morphology: WHO classify the lower cutoff for normal fertility as ‘4% normal morphology’. A sperm has several key parts being a cap on the head which is called the acrosome allows the sperm to enter the egg during fertilisation, the head itself, the neck piece and the tail. All parts must be present, no parts may be duplicated and all parts must have normal morphology for the entirety of the sperm to be considered normal. A normal head is oval in shape, smooth, and regular, about 5um long and about 3um wide. The acrosome should cover 40-70% of the head. There should be no large vacuoles (like bubbles) inside the head. The midpiece of the sperm should have a regular shape, meaning it doesn’t get wider or narrower along its length and be the same length as the sperm head. It should also be aligned with the sperm head, not sticking out sideways at an angle or off centre. The principal piece should also have a regular width like the midpiece but is thinner and longer, about 10 times the length of the head. There should also be no sharp angles in the tail which indicates a break. If a sperm meets all of these criteria, then, and only then, can it be considered normal. In short, any sperm that doesn’t meet all the criteria of a normal sperm, even if it’s borderline, is considered abnormal.

If your sample is for analysis only then we stop at step 2. If its for treatment then this third step is required:
For treatment your sample undergoes a process called density gradient centrifugation. The lower and upper ‘gradients’ are carefully layered and the semen layered on the top. The sample is then centrifuged for 15 minutes. Clear ‘seminal plasma’ is retained on the uppermost part of the gradient after being centrifuged followed by a clear separation of white blood cells, debris and other cells. The immature, abnormal sperm are seen along the gradient based on their density and motility.
Highly motile normal sperm move actively to the bottom of the gradient and collect as a pellet. We then wash this pellet twice (again in a centrifuge) until finally we have the very best sperm which we then re-count and make a calculation of the total number of motile sperm (for Intrauterine Insemination ‘IUI’) or calculate the tiny volume of that sperm required to enable us to add 150,000 sperm to the eggs later for IVF.

Here’s a typical before and after schematic of a sperm sample on the left before preparation and one on the right after it. It is the sperm at the bottom of the right tube that we use for treatment having removed the abnormal sperm and dead sperm. Before treatment (after it has been centrifuged) we have to also wash the sperm and then effectively leave the sperm with ‘sperm food’ for an hour or two so that it is primed and ready to do when its time to meet an egg. 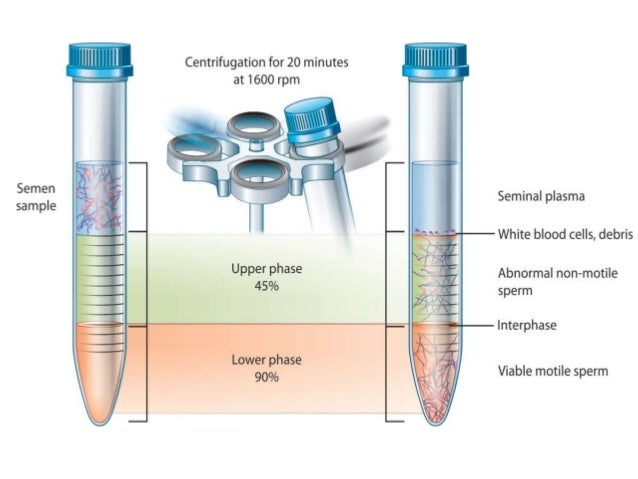