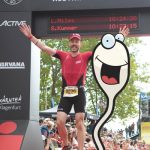 The first blog on CRGW’s new website set me a task to talk about something interesting! My 2 passions in life are Embryology and Triathlon. I know, very different but I figured if I could somehow integrate the two it could get interesting. For me at least.

As my family and friends would attest I’ll get up at obscene hours to incorporate cycling, running and swimming into my day and have a perfect 40-mile cycling route to work and back which may explain to some patients why I’m seen occasionally entering or leaving the clinic in lycra. I can but apologise.

The question that I wondered was who is the better swimmer; a sperm or me?

I look at literally millions of sperm every day and particularly with ICSI see sperm very close up and at very high magnification. They are truly awe-inspiring cells. They have almost perfect streamline shape and can seriously shift which is why us embryologists have to put them into a viscous treacle like solution just before ICSI to make it harder for them to swim. This slows them down hugely enabling us to catch them before injecting them into an egg.

A sperm’s tail moves differently to how you may imagine. A dolphin’s tails goes up and down. A sperm tail on the other hand rotates not from side to side as it may appear when looking down on one but rather in circles. A bit like the propeller on a boat or a turning corkscrew.

As a triathlete, I sometimes do long distance triathlons which most people know better as Ironman. This event kicks off with a 2.4 mile swim. So, the question is… if a sperm was human size who would win the 2.4 mile swim, me or the fella’ with the long tail?

Every second, the average man produces 1,500 sperm adding up to over 500 billion over the course of his life. Each sperm has a single goal – to create life. A sperm is the densest cell in the male body. It is lean with all systems focused on optimising its ability to swim to and fertilise the egg. This doesn’t bode well for a race with an embryologist. A sperm is about 2 thousandths of an inch long but has to swim over 6 inches from the base of a woman’s cervix to the Fallopian tube where it will fertilise the egg.

‘Spermatogenesis’ (sperm production) from start to finish takes around 72 days or 2 ½ months to make a sperm. This is why if you get sick or  have a fever and we do a sperm test 80 days later we may see a temporarily lower sperm count. During the 72 days a sperm will travel through over 25 feet!!! of microtubules in the testicle. Each sperm starts as a ‘germ cell’ which divides and undergoes meiosis to become a baby sperm, or spermatid. The spermatid is nourished by nurse cells in the testicle and it slowly grows a tail. After it is fully developed, it is released from the nurse cells and sent into a long tube, called the epididymis, where it learns to swim and is stored until it is ejaculated out of the body.

Sperm production actually starts in the brain where the hypothalamus constantly monitors blood testosterone levels as an indicator of testicular activity. As blood testosterone levels drop, the hypothalamus fires up and begins secreting a hormone called GnRH (gonadotrophin-releasing hormone) which flows directly to the pituitary gland causing it to produce luteinising hormone (LH) and follicle stimulating hormone (FSH).

These hormones may sound very familiar to our female readers as these are key in assessing female fertility and performing treatments.

Luteinizing hormone travels from the pituitary gland to the testicle where it stimulates Leydig cells to secrete testosterone. FSH then concentrates that testosterone into the seminiferous tubule where sperm are made. Germ cells lining the inner walls of the tubules undergo a special process called meiosis that splits the parent cell DNA in half and rearranges it into new, unique combinations. Each one of these new cells will become a sperm cell.

Sertoli cells absorb testosterone that has been concentrated in the seminiferous tubule. Then, much as a mother nurses a young child, they provide testosterone and key micro-nutrients to baby sperm cells (spermatid). As they develop, the spermatids are pushed towards the centre (lumen) of the seminiferous tubule to make room for new cells that are created at the edge. Upon reaching the centre of the tubule, the adolescent spermatids grow tails and are released to be carried out of the testicle and into the epididymis. In the epididymis they finish maturing, learn to swim and are stored until they are ejaculated out of the body. Sperm can live in the epididymis for about three weeks. If not ejaculated within that time, they will die and be reabsorbed by the body.

Sperm cells are sophisticated packages for delivering DNA to the egg to create a new genetically unique person. Mother Nature rearranges your DNA into millions of unique combinations, so that each sperm cell carries a slight (and hopefully improved) variation of you! You have 46 chromosomes that contain all your genes. Each chromosome is paired, so there are 23 sets or pairs of chromosomes. One set of 23 chromosomes are given to you by your father and the other set by your mother. Each cell in your body contain all 23 pairs.

In the normal life of the cell, the DNA is unwound in a long chain of spaghetti so that the cell can use it to create proteins that enable the body to function properly. You can think of genes as instructions to the cells for how to build proteins. Slight alterations in genes cause slight alterations to the proteins they create. For example, there are several genes that instruct the cells in your scalp to create proteins that become the hair on your head. Alterations to those genes will alter colour, texture and shape of your hair. They can also cause disposition to baldness. Each of your cells contains two copies of every gene, one from your mum and one from your dad. When the genes are different from each other the cell has two options. It can follow the instructions given by a dominant gene or it can blend the instructions given by the both genes much as a cook improvises using two recipes to make a new dish.

When sperm cells are created, DNA is taken through two steps. First the two pairs of chromosomes are brought together, chopped up and reassembled causing some of the chromosomes to have a mixed set of genes coming from both parents. Then, the pairs are divided so that one of the chromosomes goes into one sperm cell and the other goes into a second sperm. The resulting sperm will end up with some genes that are entirely from your mother, some from your father, and some that are a blend of the two. The last chromosome is known as the sex chromosome and contains an X from your mum and a Y from your dad. When the pairs split during the formation of sperm, the X goes into one sperm and the Y goes into another. The means that half of the sperm are female and half are male. As embryologists we cant tell if a sperm is male or female just by looking at it however.

Sperm are incredibly sensitive to alterations in temperature. For proper development, they require an average temperature lower than that of the typical body temperature. The scrotum is cleverly engineered for such temperature control and can relax or draw in a testicle in response to temperature change to protect it and the sperm production going on inside.

Swimming around, sperm generate a significant amount of metabolic bi-product known as reactive oxygen species (ROS). Patients may hear us embryologists describe ROS as ‘exhaust fumes’. Similar to exhaust that comes out of a car, ROS is the bi-product from the sperm’s engine burning sugars and nutrients to generate energy. Small amounts of ROS help sperm in the process of fertilisation, but large amounts of ROS can injure and even kill sperm. The body’s natural defence against reactive oxygen species is the release of antioxidants. Antioxidants, such as vitamin C and vitamin E, are typically molecules that contain ‘double-bonded carbon’ that enables them to easily bond to and neutralise reactive oxygen species. This is why antioxidants in your diet are good for sperm! See more on antioxidants below.

Here are some of the top nutrients that support proper sperm development:

Coenzyme Q10: Converts food into an energy source for cells & serves as an antioxidant
Folic Acid: Provides critical molecules needed for DNA replication
Selenium: Helps to regulate hormones, serves as an antioxidant & supports the structural integrity of the sperm neck-piece that connects the head to the tail.
Vitamin E: Fat soluble antioxidant
Vitamin C: Supports the development of key amino acids necessary for cell division & serves as a powerful antioxidant.
Zinc: A building block for testosterone, semen, sperm and the prostate. Perhaps the manliest nutrient on earth!

And the winner is…

So if a sperm were scaled to human size, its swim to an egg would be a  distance of almost 3.5 miles (so longer than my 2.4 mile Ironman swim then!). The fastest sperm cells can cover this distance in 30-60 minutes, overcoming daunting obstacles along the way. I can do 2.4 miles in around 70.

So the sperm wins. Easily. I suspect most of you suspected that was coming!

An Ironman does however have a 112 mile bike ride and a 26.2 mile marathon that follows the swim and in those latter disciplines I’d have the sperm beaten!

As an aside, going back to my earlier mention of a dolphin, the U.S navy studied dolphins to aid their knowledge of making a new underwater craft and found them to be a staggering 90% efficient. Michael Phelps (23 Olympic gold medal winner) is around 9% efficient. That probably makes me about 3% efficient! A sperm? Who knows but its going to be way up there!

I’m going to be doing some more blogs for the chaps over the coming months to kick off the blogs since sometimes men can feel a little overlooked in the fertility process. Oh and please feel free to drop me a line if you have a particular topic you would like me to cover (male specific or not).

Right, that’s me done… Just time to go for a run!